5 or 6 ways to design a Code Review ✨ Experience ✨

As a pull request (PR) author, it’s great to structure your PR in a way that’s easy for reviewers to review.

The theory is that, by investing your time up front, you save time for your ✨ team as a whole. ✨

LEFT: Author that did not structure their PR 😞

RIGHT: Author that did structure their PR 🙂

According to this data from a questionable source, structuring your PRs will save your team 20 time units.

In this blog post, I’m going to share a few of my favorite techniques for structuring PRs! I’ve split them up into 3 categories.

To keep this post beginner-friendly, I’ll share each git command used. That said, I recommend reading about git rebase first if you’re not familiar with it.

For me, it’s implausible to have good commit history when I’m done developing a feature. I always try to do it, and I’m relatively successful at first. But then my code doesn’t work. And then, once I’m happy with the code, my commit history looks like this!

Thankfully, I can control what my commit history looks like before I open a PR! 👏

This is my favorite technique, since it’s quick, easy and works for most use cases.

The technique involves resetting my entire commit history and starting over. I run the following git CLI commands:

Afterward, it will look like I made all of my changes, but haven’t actually committed anything.

I have no commit history now, so I need to re-commit my changes. Before I do that, let’s take a brief detour. We need to decide what we want our commit history to look like at the end.

I find that my individual commits often don’t map to individual files—they instead involve small related chunks across multiple files.

When viewing one of the “bad commits” individually, the reviewer may be thinking “are they going to test this function?” or “what function is this test testing?”

(For a small change like this, unstructured commits aren’t a big deal. Larger PRs, however, may contain a lot of unrelated changes within one file. While that may also be a sign that the file needs re-architecting, that’s out of scope for this post.)

Staging only some changes

Following those guidelines, I’ll need to stage only some changes from any given file. I like to use:

After that, it’s time to git commit the staged changes. I’ll repeat git add -p and git commit until all my changes have been committed, then I’m ready to open a PR! 🙌

Technique 2: Put “moved code” in its own commit

For more complex PRs, my Reset and patch technique isn’t enough. This usually happens when I moved a lot of code around.

To illustrate, let’s say I decide to move decrement to its own file, rather than keeping it in utils.js (it is very different from the other functions in that file, after all 😂)

Since I’ve decided to use TypeScript for new files in this repo, I also move it into a TypeScript file and rewrite it in TypeScript. The diff in Bitbucket’s web UI looks like this: 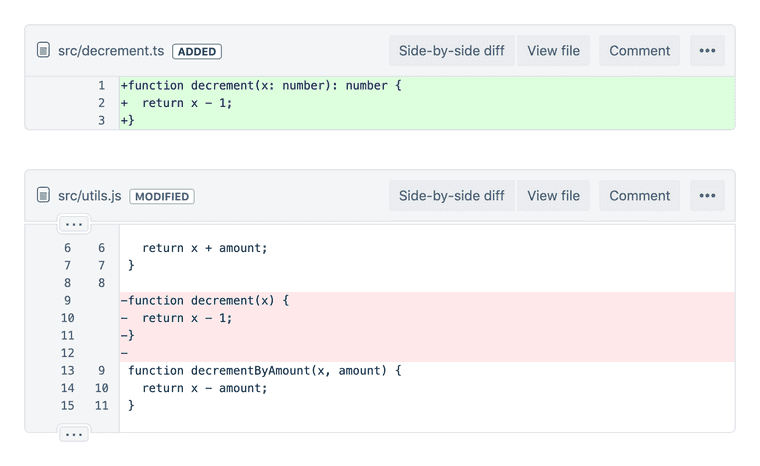 With this small example, it’s not terrible—but with larger examples, it’s hard to tell that the return x - 1 line stayed the same, while the function line changed. The reviewer can’t easily see what code was moved and what code was changed.

How can we make this easier on the reviewer?

This “history rewrite” is a little more tricky, since it requires committing an “in between” state that doesn’t match your final code changes.

To start with, we’ll run an interactive rebase, which allows us to change commits.

In the editor that pops up, change the commit we want to split from pick to edit (press i to enter insert mode in vim). That means the rebase will stop and let us edit the commit.

Save the rebase plan, and it will stop right after the edit commit. (Esc, :wq, Enter in vim, or stop trying and configure git to use a different editor 😂)

Now, the commit has still been committed, but we can amend it. I’ll amend the commit to only move the code, by undoing the implementation changes I made.

Personally, I like load the old file in Bitbucket in a web browser, then copy and paste the old implementation overtop my new implementation*1:

Then I save, and:

After that, I undo (⌘-Z) 😂 my “paste” to recover my new implementation:

and I add this “implementation change” as a new commit:

Now we’re done with this part of the rebase! Run this command to finish up.

Now, if you look at the commit diffs, you’ll see two separate commits:

First, one that just moves code: 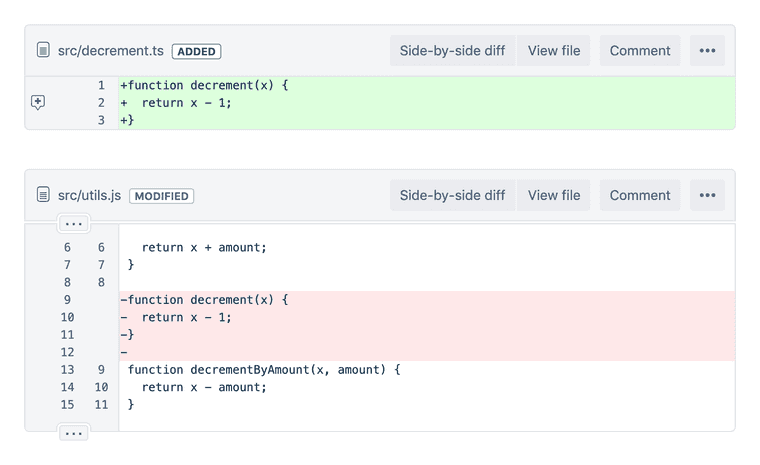 Followed by one that only changes code:

Looks good! The reviewer doesn’t have to manually scan for what changed between the two implementations*2.

Technique 3: Honorable mention: Do nothing

I leave this here non-sarcastically 😂. For some PRs, if rewriting commit history isn’t worth the value it provides to reviewers, then don’t do it. That’s a tradeoff for you and your team to decide 🙂

Now that I’ve restructured my commits, I can go back and write commit messages! (yes I really do everything at the last minute!)

Let’s start with an example commit message, then I can describe how to write it.

I write my commit messages by starting out with a template, which helps me sort out my thoughts.

What is the current behavior? Why is it undesirable?

What was the technical cause for the undesirable behavior?

What was the change you had to make to fix the behavior?

If you attempted a different solution that ended up not working, explain it here or in a code comment. Failed attempts are still useful knowledge for reviewers!

Consider if you can add any links. Examples include:

I’ll fill that out, then delete any sections of the template I didn’t use. I don’t necessarily follow the template for my finalized commit message, but it helps jog my memory to remember why I wrote the code.

(One thing to note is the commit message summary, which is the first line of your message. There are recommendations to make this concise and specific, and whole blog posts about the topic! I’m still learning how to write these concise summaries, so my only advice here is to seek out other learning materials. 😅)

Once I’ve updated all my commit messages, it’s time to move on to opening the PR!

I like to keep the description brief because I have a theory that most people don’t really read them. I prefer sticking to one-liners, bullet points and screenshots: 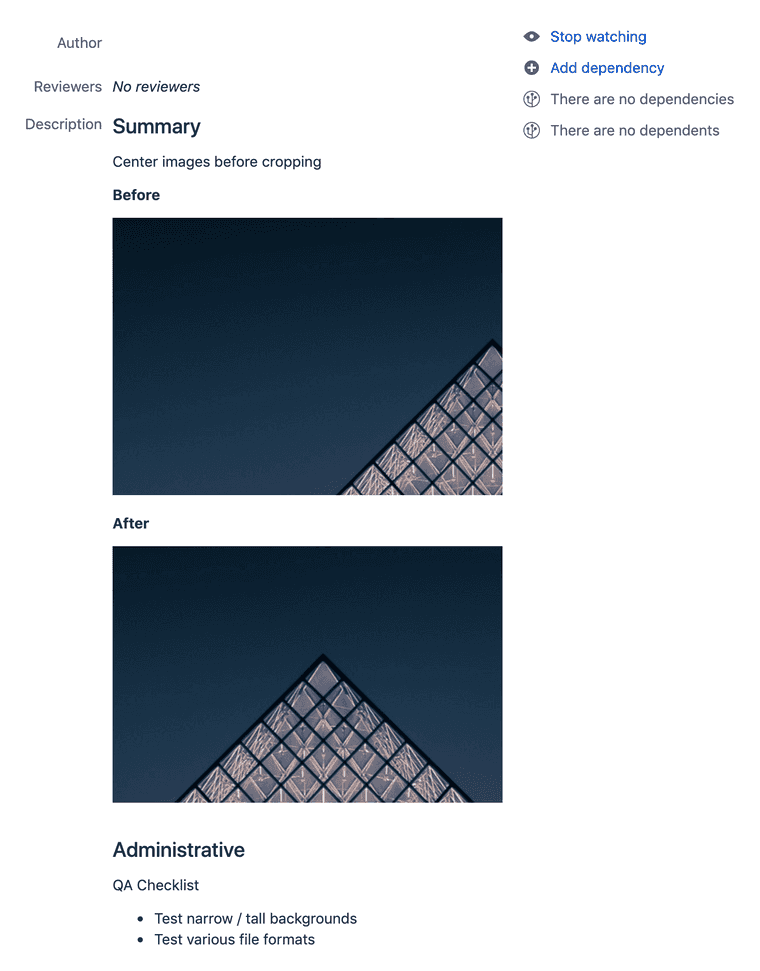 Since the default view is “review by file” instead of “reviewing by commit,” I’ll add a call-to-action (a comment 😉) near the top of the PR:

By calling out the “commit-by-commit” review method, you can make sure that your effort rewriting history wasn’t wasted!

There are a few other line-specific call-to-actions you can add, to guide the reviewer through their ✨ experience ✨

Example 1: Make it clear when a large diff is caused only by whitespace changes.

That way, the reviewer has a sense of what parts of the code need more thorough review.

After my reviewers have made suggestions, I usually don’t want to rewrite history, since it makes it harder for them to see what changed.

In that case, I recommend using fixup commits. They allow you to clearly show reviewers what changed, but keep history clean when you’re ready to merge the PR.

To recap, you’ve learned my preferred techniques for making PRs easy to review. Thanks to @Kara Finley for encouraging me to write this blog post! 😊

Since these are just self-taught techniques, I’d love to hear other perspectives as well!