In this post, I'll walk through implementing a custom animation. Each keypress lights up the LEDs with a random color, which then fade out upon releasing the key.

This video shows the finished product:

The keyboard is an ErgoDox EZ Shine (configuration: white, with tilt kit, with wing rests, no keycaps, Cherry MX Brown).

The keycaps are astrolokeys by cassidoo and sailorhg. I had wanted to buy these cute pastel keycaps for a while, but I kept convincing myself I "didn't need them." (Then, when I did buy them, the alphas kit was out of stock, and the price had gone up—so the moral here is to buy things right away if you want them.) 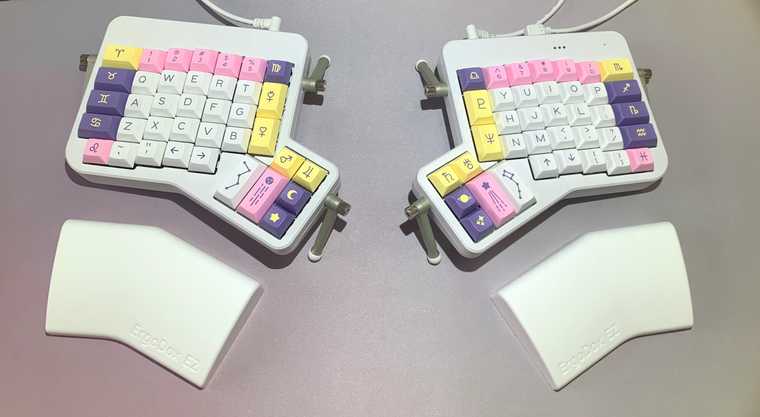 The "Shine" model has 15 LEDs on the underside of each keyboard half. I chose this model instead of "Glow" because I thought backlit keys wouldn't look good with opaque keycaps. 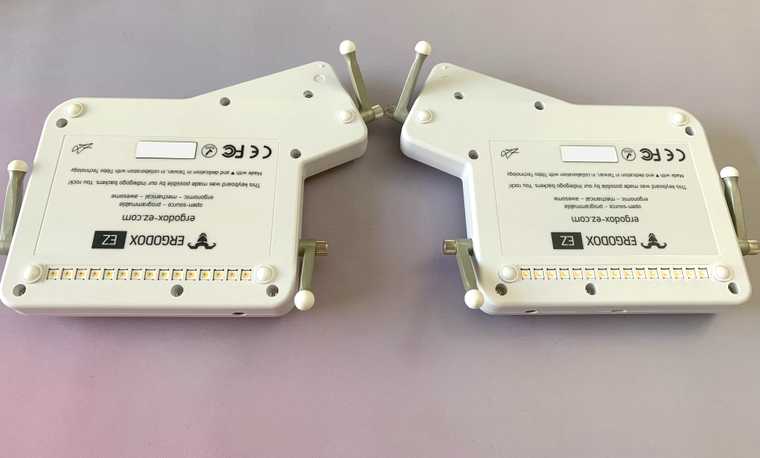 ErgoDox EZ uses the QMK firmware by default. The firmware includes some LED animations already, but I wanted to try building my own. To build my own animation, I first needed a development environment to compile the firmware from source.

In the configurator, I added a "layer color" to each layer and a key to toggle layer lighting. That way, the generated source code would include sample code that interacts with the LEDs.

Click the "Compile" button, then you'll see a link to download the source code for your layout. 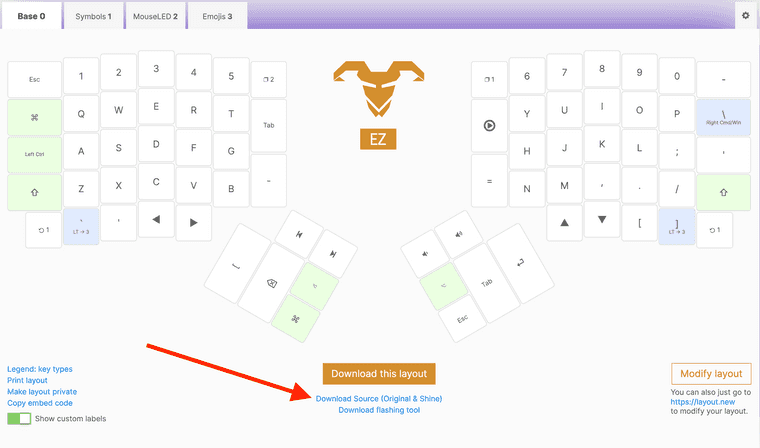 The downloaded source code includes a README.md file explaining how to set up your development environment. I recommend reading that file for the full details. In case it's helpful, here is a high-level overview of the steps I took:

Now, I'll walk you through my process for building the disco_mode animation! If you just want to see the final source code: maisieink/qmk_firmware/keymap.c.

This is my first time working with QMK firmware, and I'm not experienced with developing in C. I'm learning as I go: from the base code we downloaded, from the RGB Lighting docs, from a similar animation example, and from skimming the rgblight.c file. That means the code I write won't be perfect, but this post will be a good example of how I approach a new technology I'm unfamiliar with.

Our base source code will contain three files, config.h, keymap.c, and rules.mk. Go ahead and open all of those in your favorite text editor. We'll be doing most of our work in keymap.c. 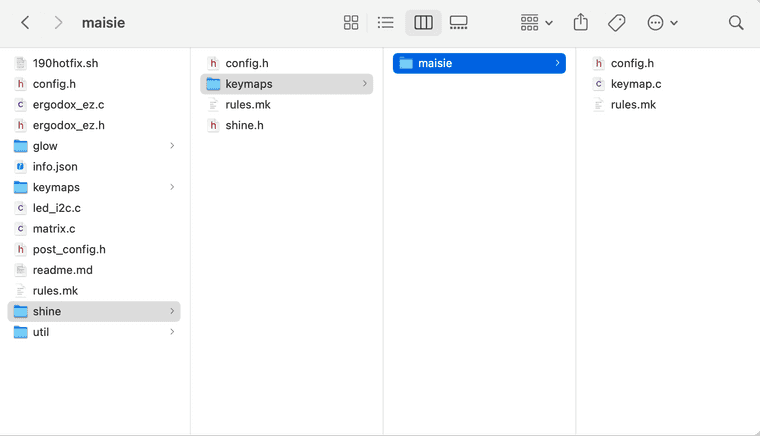 We'll work on this project by breaking it up into smaller, incremental features.

First iteration: Changing all LED colors on each keypress

Let's start with a simpler version of the animation: On each keypress, we'll change the color of the LEDs on the whole keyboard. We won't include a fadeout animation or try to change individual LEDs.

Add a new function to our keymap.c named post_process_record_user. This function is similar to process_record_user, but it gets called after the keypress is handled. I figured that I shouldn't delay the normal keypress handling by messing around with the LEDs.

Next, copy the rgblight layer lighting code from our downloaded base code. The result will be:

noeeprom prevents the LED settings from being written to the EEPROM, which stores persistent settings that won't be cleared when your keyboard loses power. Since we're changing the LED colors on every keypress anyway, there's not much need to save them as long-lived settings.

Great! Compile and flash this code, and we'll have a keyboard that flashes colors on each keypress! 😋

The next thing we'll add is a toggle button. This flashy behavior is fun, but also distracting, so we want a way to disable it.

The Custom Keycodes docs can help, as well as copying the TOGGLE_LAYER_COLOR keycode behavior from our base code. Add the following lines to your keymap.c:

Now, wherever you place DISCO_TOGGLE in your keymap, you'll be able to press that key to toggle disco_mode on and off.

Only change LEDs on one keyboard half

The next behavior I wanted to add was:

With a little bit of trial and error, I discovered:

Let's try it out! 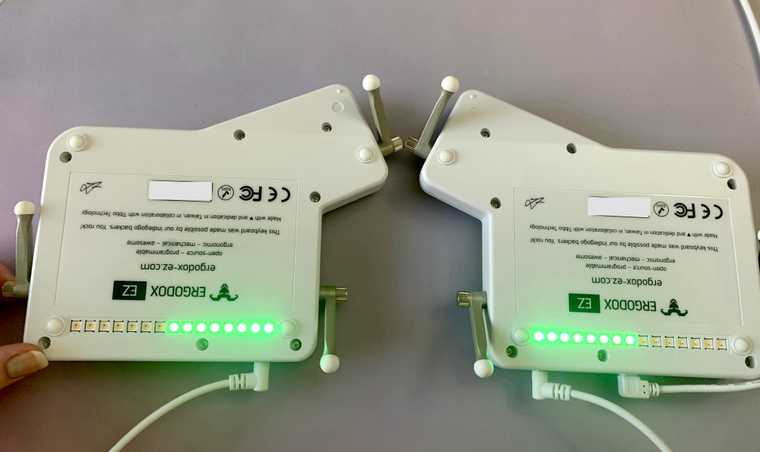 That wasn't quite what I was going for! Instead of lighting one side of the keyboard, it's lighting half of the LEDs on both sides. 🤯

After a bit of frantic googling and searching through source code, I found out why this was happening:

Defaults to 15 mirror, for legacy behavior

Ok, so to define that setting, we need to open up our config.h file. It should look something like this:

Now it's doing what we expect!

Next, I wanted to add a fadeout animation to make the lighting feel more lively. Let's go back to keymap.c to implement this animation.

First, set up variables for keeping track of the animation state between frames. Initialize them on each keypress.

Now, we'll add a new function named matrix_scan_user. This function gets called repeatedly, which allows us to decrease the LED brightness as the animation progresses.

Keep in mind that adding too much work to matrix_scan_user will cause performance problems:

Be extremely careful with the performance of code in these functions, as it will be called at least 10 times per second.

Also, we'll throttle the code to run no more than once every 20ms.

Run that code, and the animation will look like this!

The animation didn't feel as smooth as I wanted it to, mainly because of its linear easing. There are plenty of articles explaining why linear animations feel dull, lifeless, and robotic—finding one of these articles and feeling appropriately judged is left as an exercise to the reader.

I tried out a few easing functions on the fadeout animation, and I landed on easeOutCubic as the one I liked the most.

Here's a side-by-side comparison. Both animations last the same length of time, though the cubic easing will be nearly 90% dimmed when the animation is halfway complete.

Below you see the code of this easing function written in TypeScript. The variable x represents the absolute progress of the animation in the bounds of 0 (beginning of the animation) and 1 (end of animation).

Our implementation will look a little different, since our animation progress variable goes from 255 to 0, and we're animating from a brightness of 255 to 0. To adjust the bounds, we'll use easeOutCubic like this:

Expanding and simplifying that expression results in:

I'm using a C preprocessor macro to avoid unnecessary function call overhead. (Though who knows, if I defined it as a function, maybe the compiler would've inlined it anyway 🤷‍♀️). This is the first time I've written a C macro since college which made me feel…something.

I casted to uint32_t to avoid integer overflow, then moved division to the end of the macro to avoid losing precision from integer division. (I also could have casted to a float or double—I haven't done any performance testing to know if that would be a better option.)

Anyway, now that we've defined our easing function, let's go ahead and use it!

If you're interested in further exploration, I added some additional features that are beyond the scope of this blog post.

You can look at the final source code to see how those features are implemented. Thanks for reading! 👋

Back to home / Source on GitHub / Report inaccuracy