Deep dive into 'use strict' in JavaScript

Do we use strict mode in our app?

This is a question I've been asked several times—often by developers who are relatively new to JavaScript (JS).

I don't know, since it's something I haven't had to think about recently.

My theory is that this question comes from introductory JS books and learning materials. The book will discuss a certain feature, then casually mention that it behaves differently in strict mode. This style of writing could imply that "strict mode" is an important distinction that comes up frequently.

What is strict mode?

Before we get too far into this blog post, let me clarify what exactly strict mode is. It's time to go back in time!

John Resig (creator of jQuery) has a good explanation of strict mode:

Strict Mode...allows you to place a program, or a function, in a “strict” operating context. This strict context prevents certain actions from being taken and throws more exceptions (generally providing the user with more information and a tapered-down coding experience).

Strict mode helps out in a couple ways:

Let's look at an example of code that isn't allowed in strict mode:

In strict mode, this code will throw

How do you enable strict mode?

To use strict mode, you opt-in to it by placing this string at the top of your file or function:

To get more clarity on this syntax, it helps to look back at older ECMAScript (ES) versions.

Strict mode was introduced in ES5 (released 2009). The previous version of ECMAScript was ES3 (released 1999), which did not include strict mode.

Strict mode had to be an opt-in feature to maintain backwards compatibility with old scripts. Some old scripts relied on features that strict mode deprecated, and thus, would need to run in non-strict mode by default. Additionally, the opt-in syntax 'use strict'; is just a string literal, which allowed new scripts to run in old browsers.

To be more specific, every combination of browser (ES3, ES5) and strict mode (strict, non-strict) worked as desired:

Are we using strict mode?

I started to investigate. 🕵️

The first thing I did was search the codebase for the string use strict.

Next, I opened our app.js bundle that gets served to the browser. 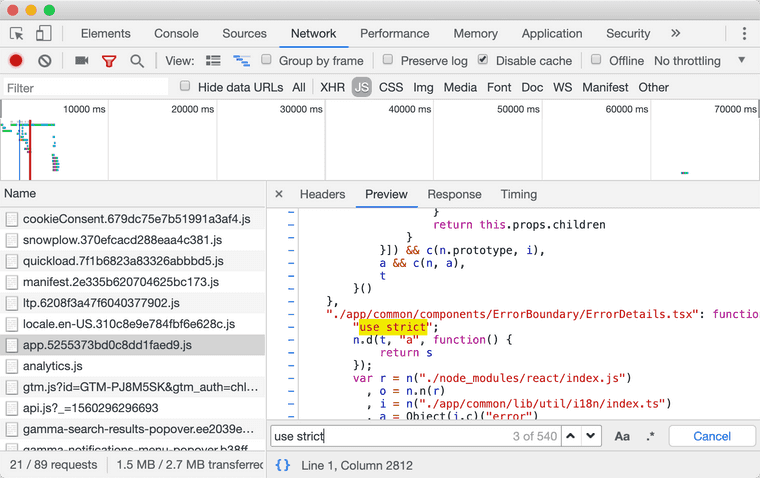 Searching that file for 'use strict' turned up 540 results! So, we're clearly using strict mode, in some capacity.

How did 'use strict' end up in our bundle if it wasn't in the original source code? We'll first need to take a detour to ES6 modules and our web app's build step.

Our codebase uses features from newer versions of ES than ES5. ES6 (confusingly, also known as ES2015) introduced native support for modules, which we use to separate our app into multiple JS files.

It turns out that strict mode is always enabled for modules. I wasn't aware of this behavior. Since modules are a new feature in ES6, they don't need to be backwards-compatible with any non-strict code written using ES5.

Because our codebase consists of only modules, all our files are automatically in strict mode. In fact, if I try to add 'use strict' to the top of a module, I get a lint error from ESLint, telling me that it's an unnecessary statement. 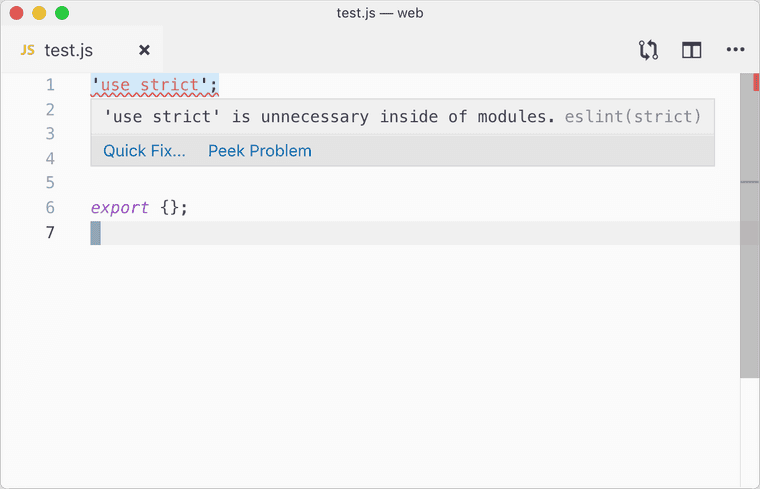 Ok, so our source code is in strict mode. But how did the 'use strict'; declaration end up in app.js? To answer this question, we'll need to look at our build step.

We currently don't serve ES6 modules to the browser. You can tell by looking at the app's html source:

We don't serve a JS module directly to the browser, at least, not at the time of writing. I assume this decision was made because, until recently, not all our supported browsers supported ES6 modules.

To serve non-module scripts to the browser, we have a build step use Babel to compile our modules into scripts. You can try out the Babel REPL to see what a compiled module looks like. 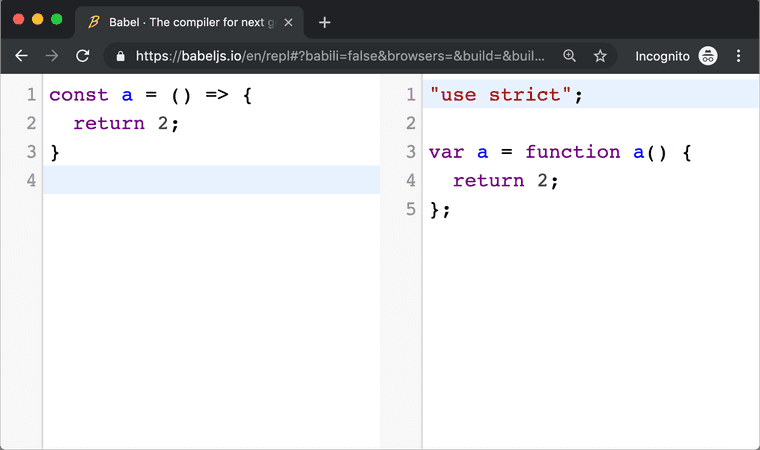 Interestingly, you'll see that babel inserts "use strict"; at the top of every module that gets compiled to non-module JS. That makes sense, since it's trying to convert the module code to a script equivalent.

After that, we use webpack to bundle multiple script files together. That's why you see several hundred occurrences of "use strict"; in the app.js screenshot—one per compiled module.

So, yes, we are using strict mode! We now understand how we opted-in (by using ES6 modules) and how 'use strict' got to the browser (build step).

But, maybe "do we use strict mode?" isn't the question we should be answering. A more relevant 😉 question is...

I don’t think so. One reason is that strict mode only throws errors at runtime. This means that I won't actually see an error message until I run the app in my browser.

Most strict mode errors can be caught earlier with static analysis, using tools like ESLint or languages like TypeScript. With ESLint configured for the app and my IDE (VSCode), I get these errors as I type: 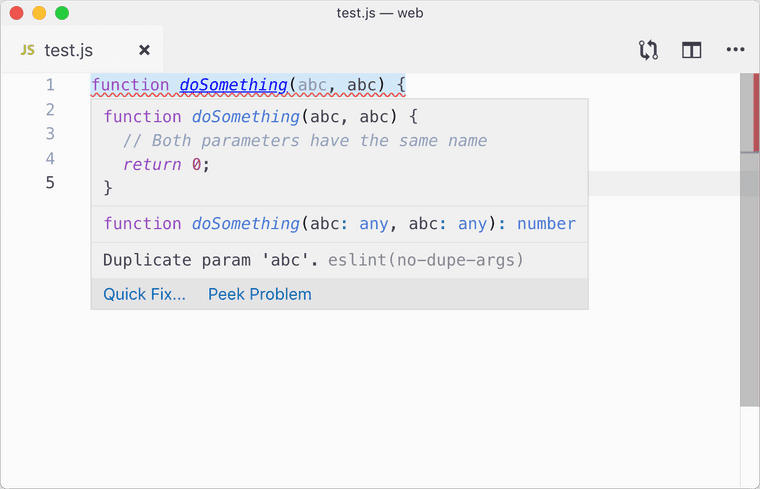 I tested eslint:all on the strict mode examples on MDN, and ESLint caught most of the errors before runtime. The errors it didn't catch were runtime-only behaviors, like this example:

For those kinds of runtime-only errors, strict mode is still useful. Strict mode also restricts features that make it difficult to optimize a JS runtime engine.

That said, I've come to the conclusion that the concept of "strict mode" isn't relevant in modern JS development. Using a combination of ES6 modules, a build step, and a linter, most developers won't need to think about it.

I went down a rabbit hole trying to understand the role of 'use strict' and how its role changed over time. I'd like to think that I accumulated some sort of tangential "wisdom" from this journey 🤪

Thank you for reading!