When I work with both JSX and HTML, I get tripped up by subtle differences between the two languages. In this post, I'll share the differences that I find Very Confusing.

🚶🏽‍♂️ Before we get started, I want to clarify some definitions. You can skip this first half if you're already familiar with React! 🏃🏻‍♀️

What is JSX (intuitively)?

JSX is the syntax that goes in your React components*.

*(You can use JSX with frameworks other than React, but that's beyond the scope of this post.)

The syntax after MyReactComponent = () => ( is JSX. It looks like HTML. That's intentional!

When you run your React app, the rendered component will look similar to what this raw HTML page would render:

I learned HTML before JSX, so I use HTML as a mental model of how JSX works. I look at the JSX in my React component and imagine an equivalent HTML page. (I wonder if it's the other way around for developers who learned JSX first 🤔?)

Since JSX and HTML are so similar, in the few situations where they differ, my mental model model can be really deceptive 😱.

Fair question. When I say JSX in this post, I'm hand-wavily referring to JSX + React + ReactDOM + the DOM.

In the purest sense, JSX is just a language that compiles into JS. If you compile the code sample above for React with Babel, you'll get this equivalent JS code.

This isn't HTML in any sense. JSX never** gets "converted" to HTML, that's just a helpful mental model. Instead, JSX gets compiled to this tree of JS function calls.

This behavior is similar to how your browser reads an HTML page and constructs the DOM based on that. 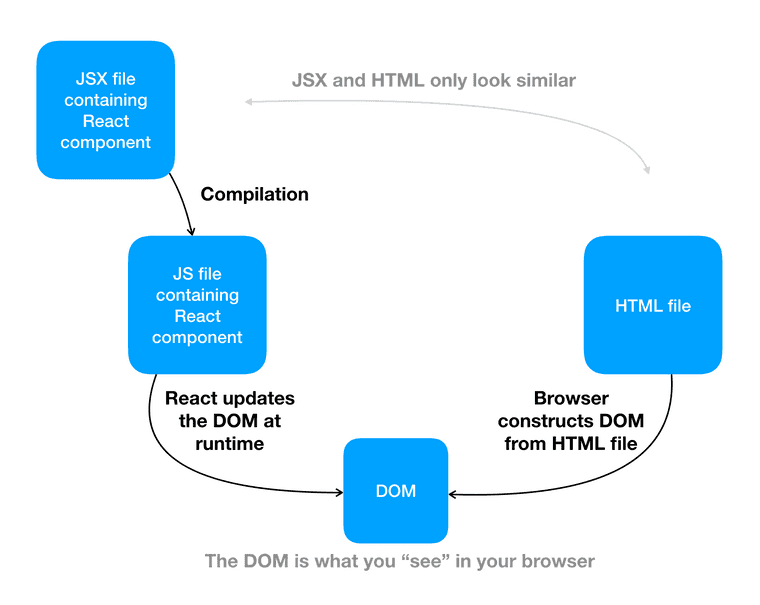 In summary, JSX and HTML look similar as source code, and they create similar end results in the DOM.

Differences between JSX and HTML

Ok! With all those definitions out of the way 😅, I'm going to talk about the differences between JSX and HTML that Very Confuse me.

If you have this element in JSX, what do you think it does?

Let's look at some other syntax to see if we can figure out what this means. There are two similar syntaxes, one in JS and one in HTML.

In JS, these two are equivalent:

In HTML, this syntax means disabled is true:

Which one do you think JSX follows?

When debugging JSX, I often find it helpful to compile the JSX to JS. (Is that a sign of a leaky abstraction 🤔?) Let's compile it.

Turns out that JSX matches the HTML behavior. A prop with no specified value gets passed as true. This wasn't a difference between JSX and HTML after all.

When does this occur?

Usually I introduce boolean props accidentally when refactoring code. I'll start with something like this:

and I'll decide to rewrite it without the {...props} spread:

But! I forget to expand name into name={name}.

Using ESLint or TypeScript is helpful in this situation, since it will warn me that I never used the variable name until I write name={name}.

Is this valid JSX?

Sort of. It will work 🤷🏼‍♂️. However, if you're using TypeScript, you'll get a compilation error saying that you can't pass a string for maxLength.

This is different from HTML, where maxlength="10" is acceptable syntax.

ℹ️ attributes and props are analogous:

In HTML, all attributes are strings (well, close enough). So if you want to set an attribute to a number, you set maxlength="10" and internally the DOM will transform that "10" string into a number.

You can imagine that React.createElement("input", ...) has a type definition that only accepts certain props:

Which means that { maxLength: "10" } would fail the type check, like we saw in the original error message for <input maxLength="10" />.

A self-closing tag is a tag that doesn't need a corresponding closing tag.

The behavior of the /> syntax is pretty different between JSX and HTML. I've found this difference most confusing when I've been working with JSX for a while, then go back to editing a legacy HTML template, since I'll expect the HTML to behave the same way JSX does. My HTML page won't throw a compilation error to tell me I did it wrong, either 😔.

It's the same behavior, regardless of the element's type. (div, br, MyComponent, circle, ...) That's it. Try it out in your compiler and see that they compile to the same thing.

First off, if you look back at XHTML (we don't talk about XHTML) or HTML4, the behavior is different. I'll ignore this fact and only cover modern HTML (i.e., HTML5, documents that start with <!DOCTYPE html>).

In HTML, the /> syntax is usually meaningless, but it depends on specifically what element you use it on.

I wouldn't recommend memorizing that, or anything. Just be aware that the /> syntax in HTML is haunted and in JSX it is simple 😂. And also, if you write a blog post and start referencing the HTML spec, you'll have a bad time writing out all the edge cases.

Anyway. It's a scary world out there. Be careful!