3 ways to autofocus an input in React that ALMOST always work!

Autofocusing is a super fun neat thing you can do to make your app easier to use.

In this screenshot of Trello, the user clicked the Add Checklist button. It opened a menu, with the Title text input autofocused and its text selected.

With this autofocusing, the user doesn't have to click on the text input; they can just start typing.

There are a lot of different ways to autofocus a text input in React. In large apps with lots of legacy non-React code, it's been tricky for me to find one method that always works. I wrote this blog post to help myself understand the subtle differences between each method.

First off, what is focus?

This input is focused, but no text is selected. If the user starts typing, the text they type will go into that input. Only one element can be focused at a time.

You can check which element is currently focused by running document.activeElement in your console.

In this screenshot, document.activeElement is set to the Title input, as we'd expect.

document.activeElement is just the focused element, which corresponds to the more clearly-named CSS selector :focus.

Typically, an element gains focus when the user...

When I say autofocus, I'm refering to focusing an element without direct user interaction on that specific element.

When done appropriately, autofocusing can simplify the user interface. Please consider how autofocusing will behave with various devices and assistive technologies, however.

Warning: Automatically focusing a form control can confuse visually-impaired people using screen-reading technology and people with cognitive impairments. When autofocus is assigned, screen-readers "teleport" their user to the form control without warning them beforehand.

In particular, aim to only autofocus after a relevant user interaction, and make sure the autofocused element has a descriptive label.

Autofocus with HTML and DOM APIs

Before we get into React, I'm going to discuss how to add autofocusing behavior natively. I think this makes the React portion of this blog post easier to understand.

There are two ways to manually focus an element:

Let's start with the autofocus attribute. To use it, you'd could create a raw HTML page like this, and declaratively specify that the input should autofocus when it appears:

Open this file in your browser and you'll see this:

Nice! That's what we wanted.

Elements added to the DOM after page load

Autofocusing on page load could be useful, but we're interested in autofocusing an element that's dynamically added to the DOM later. Does the autofocus attribute still work in that case? Let's try it out.

This example adds an autofocused input to the page 5 seconds after load:

Load the page, wait 5 seconds. You'll get different behavior depending on the browser you're using.

(The HTML spec requires that only one autofocus element exists in the document, so Chrome's and Safari's behaviors are probably equally valid 🤷‍♀️.)

If you don't want to use the autofocus attribute (which I hope you don't, at this point 😂), there is a more imperative method: Calling focus() on the DOM element.

In this example, we don't have an autofocus attribute. However, we get the same behavior by finding the input and calling focus on it.

focus() is also more versatile than autofocus, since you can call it at any time. Maybe you want an input to focus after a button click, rather than right when it appears in the DOM.

Is focus() always the right choice?

Probably! The main difficulty I've had with it is calling focus() at the "right time." For example, calling focus() before the element is attached to the DOM does nothing.

That might seem obvious! Of course you can't focus something that isn't visible.

But! This bug can be harder to isolate if your app has a lot of moving parts. For example, in our app, we integrate new React components into legacy code like this:

Notice that we render the React component on a detached element, then later attach it to the DOM. It's the same bug as above, but more indirect.

That's it for autofocusing with HTML and DOM APIs! I'll cover two small tangential topics, then we can move on to React.

Up to this point, I've been blurring (😂) together the concepts of focusing and selecting. What is selection?

Selecting text in an input can only be done imperatively with the select() method—there is not a declarative autoselect attribute.

To do it, you'd take the previous example, then add select() afterward.

It selected! This is useful in situations where the text input has a "default" value pre-filled, but you want the user to be able to easily clear it.

While blur events won't come up again in this blog post, I want to make sure you're aware of the concept. The blur event the opposite of the focus event. When an input loses focus, a blur event is triggered on that input.

Ok! Now that you understand how to autofocus text inputs with just the DOM and raw HTML pages, we can move on to React.

I'm going to go over a variety of methods—each have their use cases.

The simplest method involves using the autoFocus prop on input elements (Notice the uppercase F). It's similar to (but also very different from) the autofocus attribute we learned about earlier.

Run that, and you'll see that the input autofocuses when the component mounts. 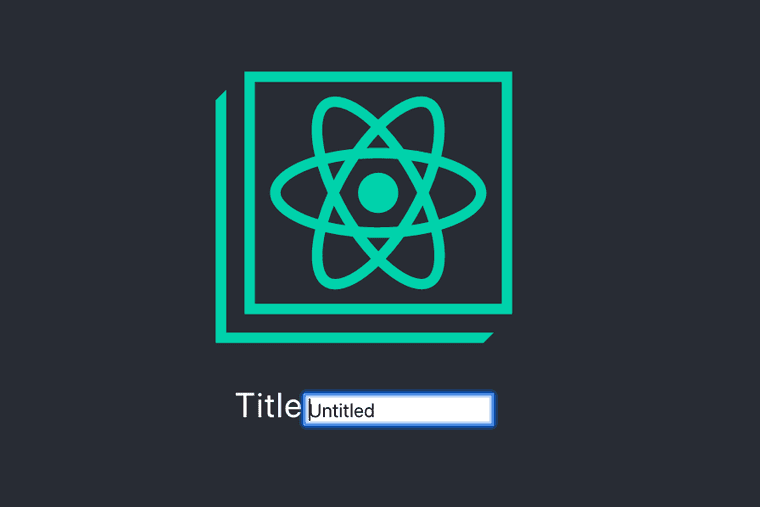 Looks good! If you want to also autoselect the text in the input, you can add an onFocus event: 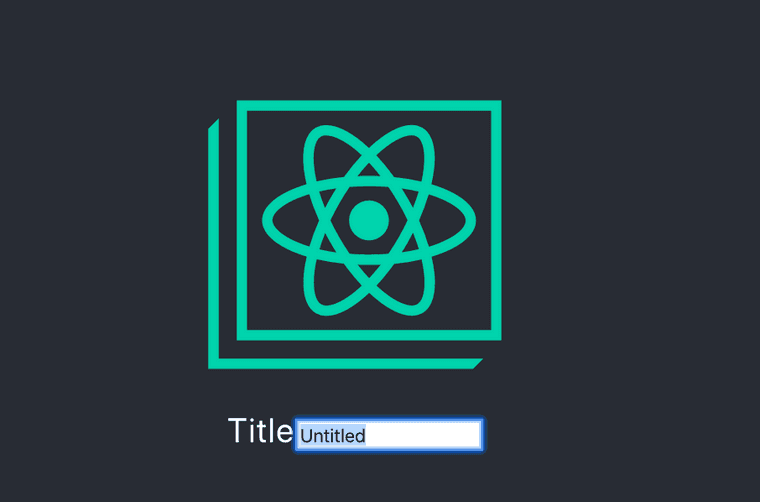 That way, whenever the input is focused, all its text will be selected as well.

How does the autoFocus prop work?

When using the autoFocus prop, I was concerned that would use the autofocus attribute, which would lead to the same problems we saw above.

Interestingly, if you inspect the DOM, you won't see an autofocus attribute on the input element:

That's odd! Turns out the React team decided the autofocus attribute had too many cross-browser inconsistencies. So they polyfilled the behavior. When you pass an autoFocus prop, React will internally call focus() when the input element mounts.

This is pretty neat! We're essentially getting all the benefits of manually calling focus(), but with the simplicity of the declarative autofocus attribute.

Does it always work?

There's one situation where I find that autoFocus doesn't work. Recall that I mentioned earlier how we render React components into some legacy parts of our app:

If you render your React component into a detached element, React will call focus() too soon. This will result in the input not focusing when your React tree gets added to the DOM.

We could refactor the parts of our app where we combine React and non-React code. However, for the purposes of learning and fun, I'm going to talk about some workarounds we can do entirely within React.

What if we wanted to manually control when focus() gets called on the input DOM element? We can do that with refs in React. Refs allow us to access the actual DOM elements that React creates.

There are like practically 10 different ways to use refs in React (ok not that many). They have subtle differences that often trip me up, so I'll be going over those differences.

In this example, we use the ref prop on our input element. By setting the ref prop, React internally will assign the native DOM element to inputElement.current. With that element saved, we can later call focus() when the component mounts. Nice!

(If you're more familiar with class components, this example is roughly analogous to using React.createRef() in the constructor and calling focus() in componentDidMount.)

Does this always work?

The [] dependency list in the useEffect call looks a bit suspicious to me. That means the effect will only run on component mount, and never again.

Thus, if we render the input element after the component mounts, we won't focus it. In this example, imagine loading is true for the first 5 seconds.

In this case, the useEffect code already ran, before the input is visible! We need to call focus later, when the input becomes visible.

Turns out that doesn't work. In fact, you'll get a lint error if you have the react-hooks/exhaustive-deps ESLint rule set up.

The useEffect handler won't actually run, since React won't re-render after the ref gets attached. In this situation, the React documentation recommends using a callback ref instead.

Keep in mind that useRef doesn’t notify you when its content changes. Mutating the .currentproperty doesn’t cause a re-render. If you want to run some code when React attaches or detaches a ref to a DOM node, you may want to use a callback ref instead.

There are other ways to work around this problem, if you want. For example, you could split the input into another component, AutofocusInput. Then when AutofocusInput mounts, it will always be visible, since the loading is kept in the parent component.

Regardless, I'm going to move on to callback refs.

When you pass a function as the ref prop, you're using a callback ref.

When we do this, React will instead call the callback with the element parameter set to the input DOM element.

As a mental model, I like to imagine object refs as a special case of callback refs:

However, when we use a callback ref, we can do more than just mutate an object. We're getting notified when the ref gets set, and can do additional work at that time. For this example, I'll call focus() in the callback itself.

Notice the distinction again—instead of passing a ref object as the ref prop, we're passing the function inputElement => { ... }.

It gets called in these situations:

In this example, our autofocusing will work with the loading indicator situation we described above. It works since callbackRef will get called after the input element is created, which is exactly when we want to focus the input.

You'll notice I used useCallback when assigning callbackRef. I didn't directly pass an inline function to ref. This is important. If you don't use useCallback, like this:

...then your input will re-focus on every render. Why?

Callback refs get called in one more situation I didn't mention: when the callback ref changes. You can think of React doing something internally like this when re-rendering:

To avoid this, useCallback memoizes the function, so it only gets created once. That way, you re-use the same exact callback on subsequent renders.

If the ref callback is defined as an inline function, it will get called twice during updates, first with null and then again with the DOM element. This is because a new instance of the function is created with each render, so React needs to clear the old ref and set up the new one. You can avoid this by defining the ref callback as a bound method on the class, but note that it shouldn’t matter in most cases.

The React docs say "defining the ref callback as a bound method on the class" is the solution, but that's referring to class components. If you're using a function component with hooks, useCallback will get you equivalent memoization behavior.

The callback refs solution also broke for me in legacy parts of the app, where the React tree wasn't in the DOM yet. I was able to work around that by deferring the focus() call with a setTimeout, though 🤷‍♀️.

In summary, we went over these techniques for autofocusing an input in React:

As well as some workarounds for common issues:

I would recommend that you use the autoFocus prop, unless you have odd circumstances (like I did) that prevent it from working.

Otherwise, I'm hoping that this comprehensive overview gives you the understanding you need to pick the correct solution for your specific app. Good luck!!